Harry Rutherford was born in Denton, Greater Manchester, in 1903, and lived for much of his life in Hyde where he attended the Hyde College of Art. He worked as a topical cartoonist for the Manchester Evening News, then moved to Cornwall for a while before ending up in London, where he became a freelance illustrator for many magazines including the Listener. His sketching was so quick and accurate that he got a television job sketching performers in a variety show for a series called Cabaret Cartoons. After the Second World War Harry Rutherford had his own children’s television series, Sketchbook, and pioneered the idea of live art on TV. From the 1950s until his retirement in 1968, he was an art teacher at the Regional College of Art in Manchester and was also president of the Manchester Academy of Fine Arts for eight years. He travelled extensively throughout Europe and also visited Borneo. He died in 1985.

Although Harry Rutherford was proud of his northern roots and painted many local scenes around Hyde, he also has an international reputation, partly due to his television work. There’s a strong market for his scenes of Manchester life, but almost equally popular are his Cornish and European landscapes and cartoons and sketches. Work dating from the Second World War is particularly sought after, as the majority was destroyed during an air raid. As with all artwork, the value of Harry Rutherford’s work varies a little according to the media, size and subject matter. At Peter Wilson’s, our in-house expert Stephen Sparrow has years of experience in assessing and valuing Harry Rutherford’s sketches and paintings, so do get in touch if you’d like to learn more about a piece you own, or discuss a potential sale or valuation.

On the right of this page you will see a few highlights of Harry Rutherford paintings & prints we've sold - to see more, including prices and dates, search our sold lot archives.

< Back to Northern Art index 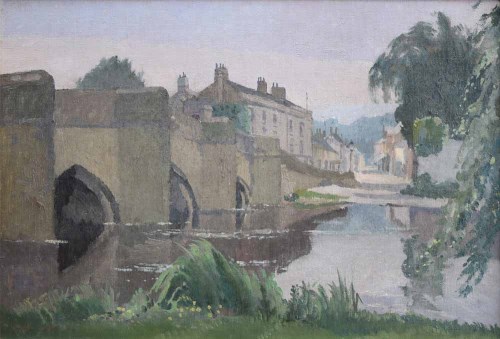 Harry Rutherford, Bridge over a river with village beyond, oil.
Sold for £270 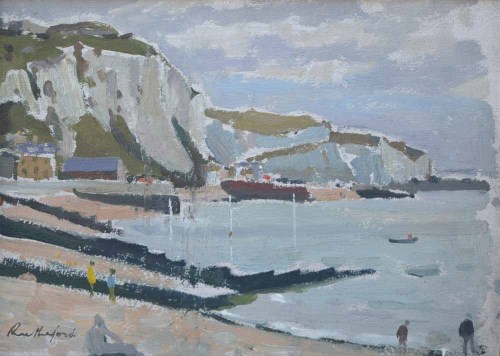