We have received a good collection of military bolt action and other FAC rifles to be included in our 18th June 2020 Arms, Militaria, Firearms, Shotguns and Airguns Auction 2020.

Perhaps the jewel of this collection is a rare Boer War Mauser model 1896 carbine with interesting Provenance.

This rare Boer War Mauser bolt action rifle is chambered in the excellent 7x57 cartridge rifle and is manufactured by Loewe and Co. (who later became DWM) The rifle has matching serial numbers 2510 to bolt stock and action and the stock is engraved with the name 'P. Synman Sep.1899.

This carbine comes from the Second Boer War (11 Oct 1899 to the 31 May 1902) which kicked off when gold and other mineral deposits were discovered on Boer land and British interest was renewed. During the first Boer War, the Boers had been armed with a mix of varying rifles such as Sniders, Martinis, muzzleloaders and anything else the people of the land used to hunt game with. In order to be a citizen of the Boer republic you needed to have a rifle, ammunition, horse and enough food to last several weeks should your service be required to defend. In the lead up to the second conflict, the need to standardize rifles and ammunition was sought and several different weapons systems were trialled before the Mauser system was engaged. The Boers were to develop such a love for their Mausers that it became part of the National slogan ‘With God and a Mauser’. 30,000 long Mauser rifles and 7,000 carbines for which the example in our sale is one of were purchased, another batch were ordered but struggled to make it through to the Boers due to British occupation of supply routes. These rifles and carbines were then sold to the citizens rather than issued in the same way regular armies armed their troops. As a consequence of ownership the Boers would often carve their names, identifying marks or other embellishments to their firearms.

The carbine included in our March Sale was subject to an article in the August 2005 edition of Magnum magazine when the then owner applied for more information on P. Synman who’s name appears on the butt. The carbine then found it’s way to a North Wales gunshop where it was sold to the present owner who was delighted when somewhat belatedly a relative of P. Synman got in touch with Magnum Magazine. Ben Synman’s letter (penned from Kokstad South Africa) regarding his Great Grandfather Pieter Andres Synman was forwarded through the chain of previous owners to the current vendor and a scan of the letter is now present with the carbine in our 23rd January  Sale. 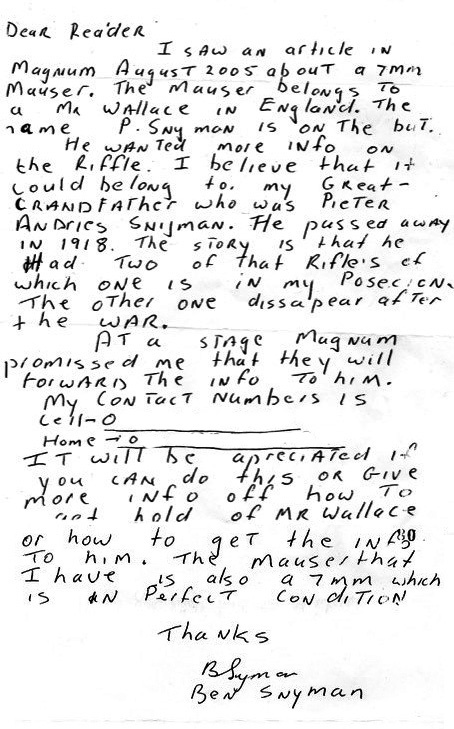 The carbine exhibits the typical details of the 7,000 Mauser 1896 carbines supplied to the Boers just before the outbreak of war. These features include side mounted ring sling swivels (ideal for mounted troops), cock on close bolts (as apposed to a lot of Mausers which cock when the bolt is raised), flat sections to the underside of the bolt which is a feature peculiar to the Boer Mausers, and ground magazine followers to allow the bolt to close on empty. 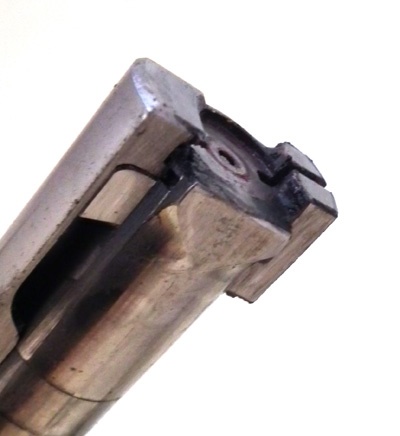 Our next Arms and Militaria sale will be held on Thursday 10th September. If you have something you might like to consign to one of our Arms and Militaria Auctions please contact Chris Large chris@peterwilson.co.uk  01270 623878 or alternatively fill out a valuation form by clicking on the link.