Magnificent barrel organ to go under the hammer

For a decade it delighted audiences passing through the foyer in Burslem’s Queen’s Theatre. In 2005, it played for the BBC Antiques Roadshow and on September 15, this magnificent mirror glass and carved oak barrel organ will perform again when it stars in a Peter Wilson auction in Nantwich, Cheshire.

Also taking a curtain call will be Gertie Gitana, the Potteries-born music hall superstar of her day, whose portrait adorns the centre of the ornate music machine.

The coin-operated barrel organ has been consigned to the Peter Wilson sale by Mary Lewis, who lives in Wolstanton. The barrel organ passed through her family over the years and the money raised from its sale will help her grandson Declan (21) fund his studies for a degree in medicine at University College London.

Declan was 10 when he appeared on the Antiques Roadshow with the then presenter Michael Aspell when the show visited Middleport Pottery.

“The barrel organ was in store before that, but the BBC paid to have it transported to the Roadshow,” Mrs Lewis said. “I met Michael Aspell and we played it for him, which was shown on the programme. As the program goes out all over the world and is still being repeated, we’ve had people from Australia telling us even now that they have seen us.

“We were friends with the proprietors of the Queen’s Theatre and after the Roadshow, the barrel organ was taken there and put in the foyer where it played for anyone who put money in the slot.

“It’s been in the family for so long we’ll be sorry to see it go, but we’ve decided now is the time to let someone else enjoy owning and listening to it as much as we have,” she added.

Who applied the portrait of Gertie Gitana, born Gertrude Mary Astbury in Longport in 1887, in place on the door of the barrel organ is not known, but she was one of the great musical stars of the day and pin-ups of her were plentiful.

She went solo in 1900, going on to top the bill in music halls and concerts across the country, ranking alongside Marie Lloyd and Lille Langtry. Her signature song was “Nellie Dean” which she turned into a one-woman show seen by more than 200,000 in London alone.

She was a forces sweetheart in the First World War raising funds for the war effort selling studio photographs of herself and holding signings. She also sang for George VI at a Royal Variety Show.

Gertie died in 1957, but her presence remains. In recognition of her achievements, Stoke City Council renamed Frederick Street in Hanley “Gitana Street”. Her name is also Cockney rhyming slang for banana.

The early 20th-century barrel organ plays two tunes, a small handle causing them to alternate. It is operated by turning a crank handle which causes a spiked cylinder, to rotate, the spikes causing hammers to strike the strings in an iron piano frame, which is marked “Bruxelles Place De La Reine 3”. An external hand-painted name panel reads: “Jules Moisse Rue Jenusalen 25 Schaerblek”. It measures 214cm high, 132cm wide, 74cm deep (84.25 x 51.97 x 29.13 inches) and has an auction guide price of £2,000-2,500. 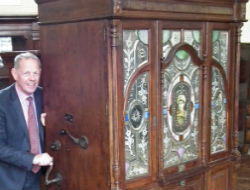